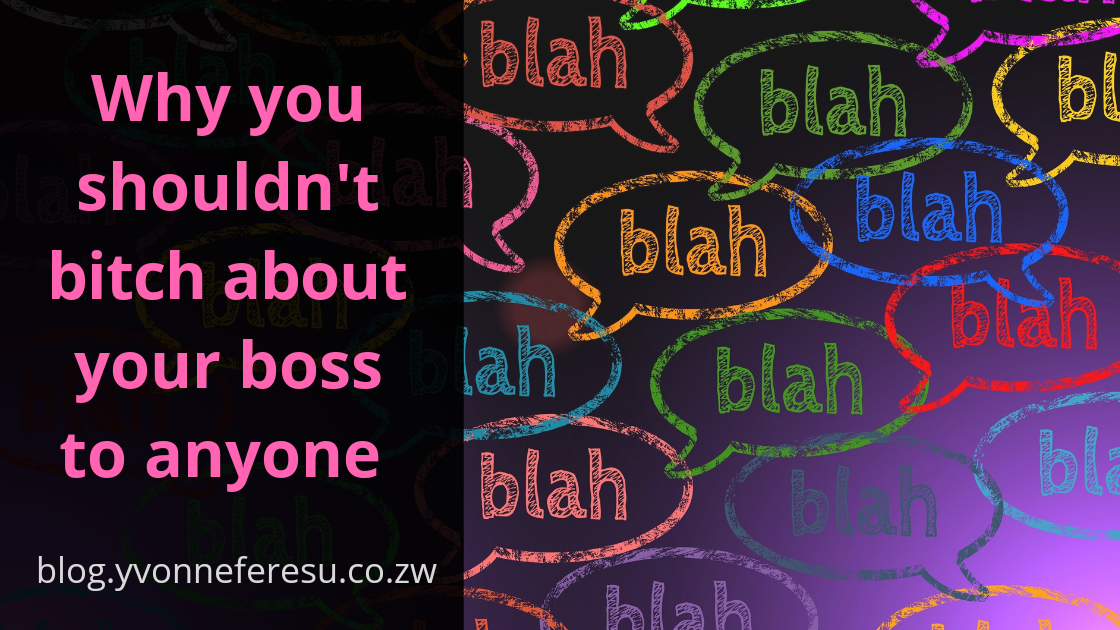 It’s tempting. It really is. When you’re angry, and frustrated and you just want anyone who’ll listen to know what a horrible human being your boss or superior is, it’s tempting to go on a bitch fest. But it’s never a good idea, believe me, and there are multiple reasons you shouldn’t, and we’re going to get into some of them.

It looks bad on you

So first things first, when you trash talk your boss to other people, you run the risk of seeming petty and unprofessional, which isn’t something you want. What’s worse is when the people you’re complaining to don’t feel the same. It’s one thing to voice your complaints, or discuss challenges you’re having with your employer or superior, it’s another thing to bash him or her whenever you have the tiniest chance.

Everyone is entitled to an opinion right? Yes, definitely. You’re entitled to think your boss is some evil bitch from hell or the devil himself, but others are also entitled to see you as a giant asshole for saying it. You can have your unflattering opinions about other people, but you don’t have to air them to whomever will listen.

And why should you care if it makes you look bad? Because good relations, networking and referrals are vital to your career growth. You may think that your boss’ boss’ opinion is the only one that matters, but that’s not actually true. Peer recommendation matters too. These are the people who put in a good word for you when need arises.

I remember in one of my previous jobs, a former colleague of mine recommended me to my prospective employer just after my interview. This guy had joined the company earlier. I had no idea he put in a good word for me until my then boss told me that was one of the contributing factors to my becoming the successful candidate. So yes it matters.

READ: Dear graduates, it’s a bad idea to apply for and accept just any job, here’s why.

Nobody wants to be around a constant complainer

…unless they are constant complainers too. Often we like to indulge ourselves in complaining, over and over to whomever can listen, and it can get pretty addictive. If you meet about with another complainer, then even better! Half the time both of you are just complaining and relishing it…but constantly whining about your boss will eventually start to irritate others. You’re probably not the only one who’s got a problem with your boss, but there are better ways of dealing with it than bitching to anyone who will listen.

It increases your animosity

Badmouthing your boss behind his or her back means you’re going to constantly focus on the negative side of things, and anything you pay lots of attention to, will naturally become very focal in your life. Eventually you’ll start to see everything your boss/superior/employer does in a bad light, and majority of the time you’ll be misinterpreting the situation.

This will increase your animosity and resentment even further. Soon enough it’ll become a cycle of dislike. To worsen the situation your employer will most likely pick up on your dislike and may start to return those vibes to you. It’s safe to dislike your boss, but the reverse isn’t always true. You’re in a world of trouble if your employer actively dislikes you.

At the end of the day, if you have issues with your boss, take it up with him/her or keep your mouth shut. Bitching about your boss behind her/his back could really complicate your life in subtle ways and you shan’t notice until it’s too late. Keep in mind that one day you might require a reference from this person you’re bashing all the time to anyone who’ll listen, and then things will really get awkward (someone will probably have snitched on you).

Remember, almost any dispute can be fully or partially resolved through clear and respectful communication.

Why I choose to remain hopeful in a continually hopeless situation

What’s really holding you back, honestly?