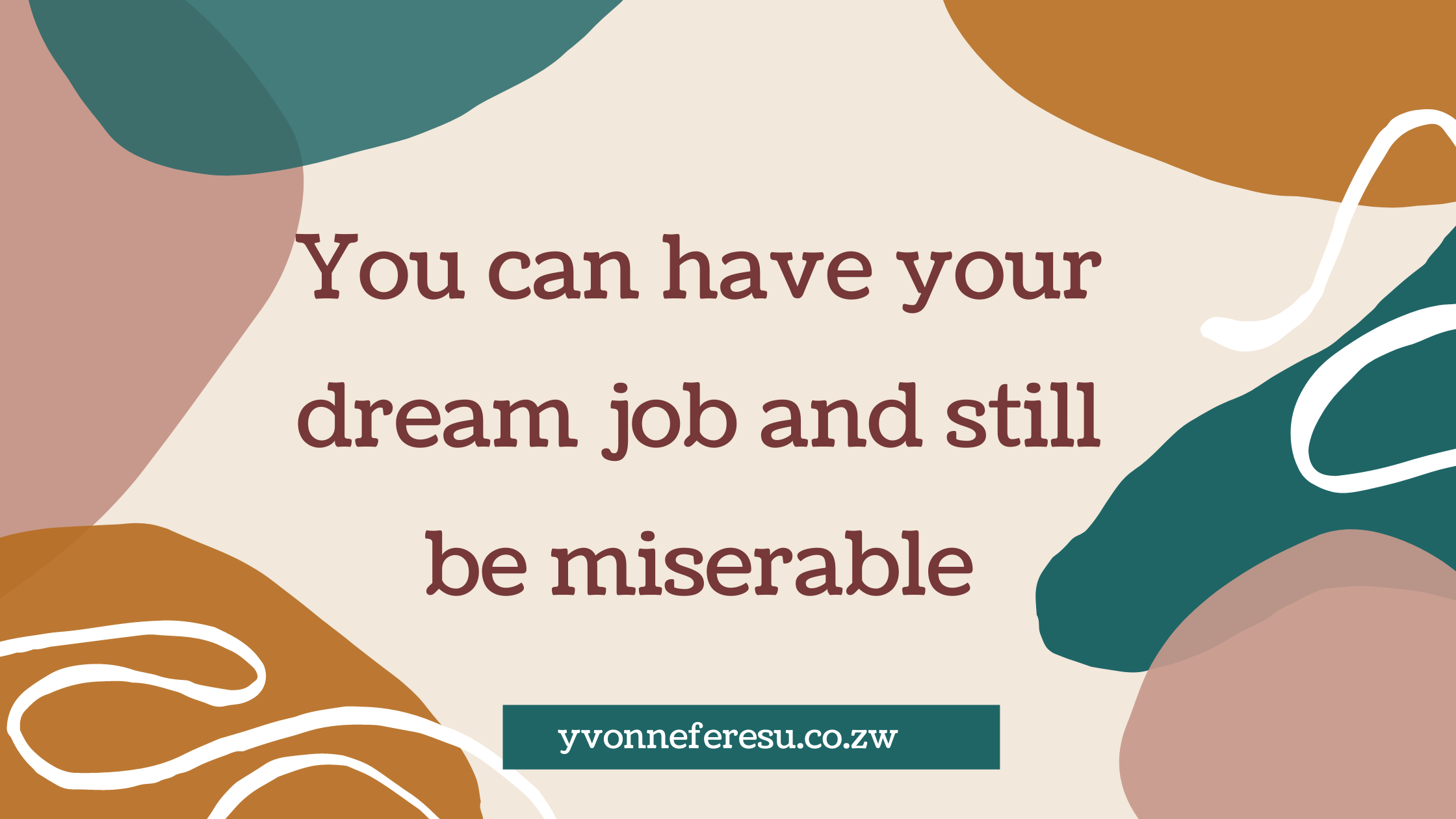 Imagine you studied Computer Science for four years, specialized in Software Engineering, and graduated with a merit. I would have said distinction, but let’s just say you also had a swinging social life too. Immediately after, you start job hunting. Your CV looks terrific; you were your university Tennis team captain, the Secretary for the Student Representative Council and you even contributed a column to your university magazine. (This is also partly why you didn’t have a First Class degree; you were a busy body).

You decide that your dream job is to work for Microsoft (Afrika) because that’s every Software Engineer’s dream (I really don’t know, so let’s just say). Anyways, instead, you spend one year unemployed, desperately searching for a job. Even though you did a pretty cool degree, you still live in a shitty economy and life is just generally unfair. As time passes your mental health starts to spiral. You ask yourself how long this will go on? If you’ll ever get a job and a banging career. You ask yourself how long you’ll have to ask for money from your parents to go anywhere and do anything.

Eventually, you start a “side-hustle” importing sneakers from China and selling them because asking for money every single month to prepare for the one week you bleed out, every single month, sucks. (Yeah, I just made you female because women have that pesky expense they can never run away from, and it’s pretty expensive when you’re broke). It’s humiliating to have to do that as a grown woman, even with your own parents. (Or you can insert whatever unavoidable, biological mechanism the male population has that absolutely demands sanitary ware that women don’t contend with). So, moving on…you’re selling these shoes, but business is slow, and besides, you WANT TO BE A SOFTWARE ENGINEER, not a seller of sneakers (this requires skill in sales and I have all the respect for these business people!)

One day, something sticks. After a dozen interviews, a full year after graduation, you get a job offer. It’s not at Microsoft, it’s entry level and the salary isn’t something to brag about, but it’s a job, and you’re happy. It came around just in the nick of time because your mental state had progressively worsened. You didn’t want to bump into any of your peers (pre-pandemic) because of that dreadful question, “So what are you doing these days?” You also started to despise family gatherings for the same reason, everyone wants to know if you have a job yet.

All of that, plus your own inner criticism was starting to make you feel a little worthless, and you were starting to question the point of life. This is generally not a good place to be, and once this starts to happen, or even before, you need to seek help and reach out to someone. Often when we’re drowning in our own pain and misery, we forget that we’re not alone. There are people who love us, and will hold our hands. We’re also not the first or the only ones to go through such an experience, and speaking to someone who’s been there, helps. You’ll often realize that troubles are not unique.

Back to our story. So, you have this new job, and you’re excited to finally start making some headway. Okay, pause. I could really just go on with your story but we’re going to cut the long story short using a remote control. Fast forward three years later, through sheer determination, social intelligence, hard work and luck, you’ve landed a job at Microsoft. Congratulations! You didn’t really like your old job, (in fact sometimes you despised it) but you were grateful for the income and liked not being broke all the time. Plus, you knew you needed it to help you get into Microsoft, so you bore it, and your strategy worked. You’re there and you can’t wait to kill it.

But there’s something you didn’t anticipate, because three months after starting your new job, things start to go sideways. You can’t put your finger on it exactly but you know that something is wrong. Those debilitating emotions you had to contend with in your year of unemployment except they’re different and harder to deal with because now you can’t justify them. You were unsatisfied with your life for the past three years, but bore it in pursuit of your dream. You have what you want, your dream job, so why are you miserable? To your absolute horror, you realize something you had stubbornly ignored in your pursuit for a glowing career as a Software Engineer at Microsoft…you hate software engineering, or is Microsoft you hate working for?

This is where things get extremely messy, because you spent the past three years pinning the Microsoft logo to your dream board, visualizing yourself there and now that you’re there, you have this ugly realization. To make matters worse, you moved out of your parents’ house, and now you’re renting out this place you really like. You’re even thinking about getting a car and you’ve saved up for it. Now if you just hated your job and it didn’t affect your mental health, you may have been able to simply go on. But you’re not that person. You’re the kind of person who likes being excited by your work and want meaning and purpose you can identify with.

And those debilitating emotions we spoke about? They are back with a vengeance. You’re frustrated with yourself for not loving this great thing you have, a well-paying position at a world-class company. Who would hate that? You would, and you hate yourself for not loving it because it’s illogical not to. Every morning, you fight yourself to get to work, to wake up and sit at your work station. You have to force yourself to do every little task, and that takes a lot of energy. You feel terrorized by your bosses even though really they’re just demanding that you do what they hired you for. As time passes, and you’re forcing matters, you start having meltdowns in the privacy of your apartment.

READ: Why I quit my job, and why you shouldn’t

Pause. At this point, you should be seeking help because it only gets worse from here. When you live with constant tension, eventually something has to give, and if you don’t do something soon enough, that something will be you. There’s no happy ending for your family here if you’re the one who buckles. Typically, the only way out seems like death, but it’s really not. It feels like it, but trust me, it’s not. There are other really uncomfortable options, but that’s the thing, they’re only uncomfortable for a short while and then it gets better.

Back to our story. You’re in a shitty position and feel trapped and don’t know what to do. Before we dive into several ways this could go, the point of that entire story is to highlight that mental health is a tricky thing. Sometimes it doesn’t matter what your life circumstances are like, you could be miserable and develop a mental illness. Environmental factors have a huge impact on our mental well-being but so do internal factors. In our story as a Software Engineer at Microsoft, you can’t justify your depressive symptoms but that doesn’t mean they’re not valid. So often we think that if we’re in a position society deems as favourable, then we can’t experience mental health problems because of it.

You can’t hate working a high-powered job, at a prestigious organization, getting paid really good money because that is the dream. But you can. You can, and it is the people in these situations who are at really great risk because nobody expects it, therefore no one is watching for it. And people can’t speak out because of fear of judgement. The worst part maybe isn’t the judgement, it’s knowing that the advice you’re going to get is, “Hang in there and learn to cope because you have a terrific job and terrific jobs are hard to get.” So you bottle it up until it eventually consumes you. How many suicides do you hear of people with apparently enviable lives? It might not have been hating their job but there was problem that most people would not consider a problem and it went unaddressed and undetected.

Depression, anxiety, suicide…all of those can happen to anyone regardless of their circumstances in life. It’s imperative that we all know and accept that. This isn’t what I had planned to write about, it just kind of took a life of its own, therefore here we are. If you’re struggling mentally, emotionally, reach out to people. If you know someone who is, check on them, be there for them, just listen and show them some love. You can’t heal anyone, but you can help them along the way by showing them that they’re not alone.

We’re going to end our little chat here. As for the Software Engineer’s story, we’ll continue it another day. Once the post is up, I’ll update this one and put the link here. FYI, I’ve been in that Engineer’s shoes, and I’ll tell you all about how you can have your dream job, only to hate it, and why that sometimes happens.

Until next time! For now, please share this with anyone who might find it helpful or useful.