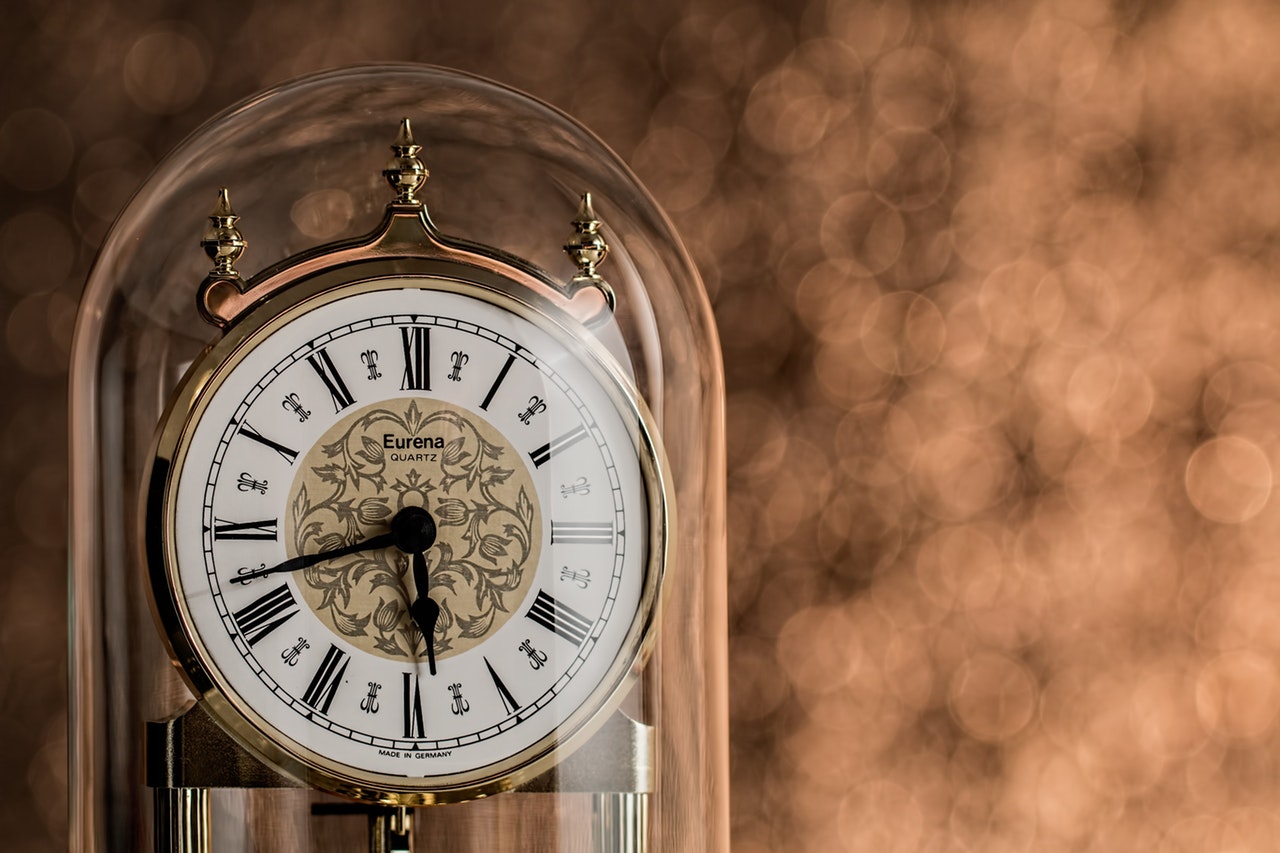 Time is vital in mastering a skill (Photo credit: Pexels.com)

Have you ever tried to lose weight, or tried to turn a skinny unimpressive torso into a set of beautiful abs? In a really short space of time? (It usually doesn’t work that way.) Or better yet watched someone else try? So they’re eager and committed at first. Then the excitement fizzles out and they start complaining about how this stuff doesn’t work. And then go on to tell you how they can’t get those abs no matter how many crunches they do? And in your head you’re thinking, “You’ve only been doing this for a few less than 30 days so, and not even consistently at that!”

Oftentimes people are not aware that, unless you’re sick or dying, physical changes to the body through exercise can take a lot of time. Reaching a certain level of fitness takes months, and even then, there’s still other stuff that’s just too painful to do.

It’s the same thing with mastery of skills, and goal achievement. I cannot stress enough the impact time will have on consistent wholehearted efforts. This isn’t some generic piece where I tell you how ‘you should keep working hard and one day it will pay off blah blah blah’, okay fine maybe I will tell you that, but stay with me for a moment.

If you’ve ever willingly committed to something and pushed through you know what I mean. I’m not talking about the years of schooling that were never really a choice. I mean the times you’ve done something purely because that’s what you wanted; and not because your parents/guardians didn’t want you to be their burden in future.

I’m going to share with you how you can use time to your advantage, and the power of compound interest, backed by very real and personal experiences. Please note, before we get into it, that I’m in no way boasting or trying to show off, but I’m merely using my personal experiences to highlight how patience and consistency pays off. So if you want to achieve mastery at anything, or to achieve a certain goal, you need to understand this first:

When I say baby steps, I literally mean you’re going to learn to sit up first. At some point you’ll get to crawling; then eventually you’ll be able to stand by holding onto the table and pulling yourself up. Now at this point some babies sort of stall, and take forever to start walking, let alone running. Other babies seem to be high on some sh*t and start running before they even have a decent number of teeth in their mouths. To make it worse, they have so much energy it feels exhausting just to watch them whiz around the room.

But that’s precisely what happens with progress; yours could be frustratingly slow, or incredibly fast. But if you see others move faster than you, that’s okay, you can rely on time to get you there eventually. After all most babies do walk at some point and once you’re all adults no one can tell, or even cares, that you were the kid who couldn’t walk until you were two, so no worries.

The thing is, you can’t skip this part though. And you can’t underestimate the value of incremental steps. I used to sprint for the university athletics team when I was still in school, to the point of competing at national level. Now to do this your physic needs to be superb, or close to it. As you can guess, obviously this took a lot of time.

The magic of time

When I first approached the coach to train with the team I could barely complete a single round (400m), and neither could I finish 5 sit-ups or press ups. I went for the 2 hour training sessions every single day (except for weekends of course). By the end of four weeks I was running 4 800m (12 rounds/4.8kms) at steady pace without taking a break. Plus I could also do 3 sets of 40 sit-ups in one sitting and 3 sets of 20 press-ups. Now whilst I wasn’t a fitness guru, I was in a better place than when I first began. That’s because I stuck to the regime, and showed up consistently without fail.

At this point I was far from the sprinter I later became, I was slower and didn’t have the muscle mass necessary. However, I wasn’t the same unfit human being I was when I first joined. This is the beauty of time, you have to understand this. Imagine the amount of progress I made, putting that kind of effort over the space of the next two and a half years? Imagine the amount of progress you can make if you dedicate yourself for years?

I joined the team without ever having  won a single medal in athletics, but within 3 athletic seasons I had earned 8 medal. Some of these were from individual events, some I won as part of our relay teams for both 100m and 400m. Yes, I went on to sprint that very same 400m I could barely finish jogging, competing with the best in the country. In the gym I could squat with 100 pounds on my shoulders, that’s about 50kilos, and I weighed 52. Now try to imagine yourself doing what you highly doubt you are capable of, and know that you could.

Did you take note of the time that it took? That happened over a space of 3 years, which feels like a lifetime when you consider your own goals. But that’s the thing, mastery takes time. I didn’t reach my Olympic goal, (I’m not a sprinter anymore), or even come as close as I would have wanted to. But I made significant strides. For me the biggest takeaway from Athletics was I learnt the art of patience, the importance of consistence and the magnificent power of time and compound interest. Which is why I felt the compulsion to share this with you.

Get into it with accurate knowledge of how much time what you want to achieve could potentially take. Ask people who have done it before, or are experts in the field. Even if they’re not experts, anyone who’s familiar with that area will know. Ask. Don’t just rely on Google. But be certain you’re asking people who are good at what they do, or have fairly deep knowledge of the area.

It’s funny that every time somebody asks me to give them workout tips, and show them a couple of workout routines they could do, they almost never ask how long it could take to get the results they want. Anytime that I dish out free advice, that it will take a lot more than a few weeks, people shy away. And yet those days are going to pass, and you will reach that date you think is too far away whether you do what you set out to or not, so you might as well just do it.

Don’t let the time aspect discourage you, it should do the opposite. You’re guaranteed of the passage of time, so add everything else. By the time a certain amount of time has passed, you’d have made some kind of measurable progress.

This is another important piece. Can you think of anything you’ve been doing since you were a much younger? Something you’re so good at now people think it comes naturally, but you know it didn’t (come naturally?) People just assume you born that way but when you look back, you can pin point when you learnt that behaviour, where and how? Capitalize on the years you’ve already put it, and take you skills to another level, it should be much easier from that standpoint.

I started speaking or performing publicly when I was still in primary school. I went from dancing Chipawo in Grade 1, acting in front of the school in Grade 6 and 7; to dancing, acting and modelling on stage in front of multiple schools in high school. Add that to giving presentations during school assemblies and at inter-school seminars during A’level. So as you can guess, I don’t have unmanageable fear of stages, and I am not too afraid of speaking in public. When I went to university I capitalized on my previous experience and did even better speech domain.

My point is, often you already made strides in a particular area,why not use that as a springboard? You become really good at anything if you deliberately repeat it over time, correcting your errors and learning. But the most important thing to note is the time it will take, or the time it took. That’s the compound effect. Let time do it’s job, and you do your part. You’ve got to be patient. As long as you’re putting in the time and effort consistently, you’ll see it happen, eventually.

Lastly, you could  have complementary habits started from when you were younger, that could boost your skill set, and accelerate your progress. This is probably a powerful habit you don’t give enough credit to. At the risk of sounding obnoxious, I’ll give you another example. I don’t do it as much now because of time, but I still love it.

When I was younger, I was obsessed with reading. I consumed books at a pretty terrific rate. I can’t even estimate the number of books I’ve read, because by the time I was 12 years old, I was reading 500-1 000 paged books with small print. Yup, I was a total bookworm and looking back, I must have been an incredibly weird child. But that obsession I had, now translates in my command of the Queen’s language. My ability to write, my storytelling and even my speech skills all benefited. I believe the reason I could write this entire article in one sitting like I did, is partly because of that. You probably have a habit you’re discounting as irrelevant to your success.

Maximize on what you already have

Do you understand what I mean now? You probably have something you’ve been doing for so long you don’t even realize how useful it is, or where it manifests. Identify that area of strength because it means you’ve already put in the years in that area. Therefore, whatever your goal, you’re not starting from scratch, rather you have a deep foundation. You may not even realise it could be a useful skill, or that it contributes fundamentally to one.

It’s the magic of time, you just need to understand how to make it work in your favour. Please note, it won’t be easy, you’re going to have to put up with the harder parts. You could read the post I wrote earlier on, about the tougher moments when you first begin. If you haven’t already, take time to find out how long your plans will take to come into fruition, and then let time run its course.

Do you have an experience of how time worked in your favour that you’d like to share? Leave it in the comments down below so we can all learn too!

If you liked this post please share it with your friends. Thank you for reading! See you next time.

Why you shouldn’t bitch about your boss to anyone

Why I quit my job…and why you shouldn’t

The problems with being young and broke